A few years ago, just before COVID hit, a Stanford University study of state-level standardized tests showed that Florida’s “learning rate” was the worst in the country — by a wide margin.

Florida students learned 12 percent less each year from third to eighth grade than the national average from 2009 to 2018. The next worst state was Alabama, according to The Educational Opportunity Project at Stanford University. Florida’s political and education leaders completely ignored that finding.

Contrast that deafening silence with the hype and misinterpretation that comes with the release of the National Assessment of Educational Progress (NAEP), “the Nation’s Report Card.” When those results came out last fall, Gov. Ron DeSantis crowed on Twitter that, “We kept schools open in 2020, and today’s NAEP results once again prove that we made the right decision. In Florida, adjusted for demographics, fourth grade students are #1 in both reading and math.”

Tellingly, DeSantis ignored the eighth grade results, which came out far worse than fourth grade — just as they have in every NAEP cycle since 2003.

The “Nation’s Report Card” is a snapshot of group proficiency taken by different cohorts of kids every two years in reading and math in fourth grade and eighth grade. It produces state-by-state results and proficiency rankings. It does not track individual kids year over year. But it does tell you how Florida’s fourth and eighth graders compare with students in other states. I crunched the data, and here’s the bottom line: Florida’s students perform worse as they move up through the grades. There is consistent, massive systemic regression with age. And the gap is widening.

This is a state failure, not a local one attributable to individual districts. Yet, in every NAEP cycle, Florida politicians and education leaders brag about fourth-grade NAEP results in press releases.

But ignoring the eighth grade results or the “learning rate” study does not change these facts:

· Florida kids regress dramatically as they age in the system. Since 2003, Florida’s eighth grade rank as a state has never come close to its fourth grade rank on any NAEP test in any subject.

Spend your days with Hayes

Columnist Stephanie Hayes will share thoughts, feelings and funny business with you every Monday.

You’re all signed up!

Want more of our free, weekly newsletters in your inbox? Let’s get started.

Explore all your options

· No other state comes close to Florida’s level of consistent fourth to eighth grade performance collapse. In the last three NAEP cycles — 2017, 2019 and COVID-delayed 2022 — Florida ranked sixth, fourth and third among states in fourth grade math. In those same years, Florida ranked 33th, 34th and tied for 31st in eighth grade.

· For comparison, Massachusetts typically ranks at or near #1 among states on both the fourth grade and eighth grade NAEP for math and reading. Its eighth grade rank has never been more than one spot lower than fourth.

· In COVID-marred 2022, Florida’s eighth grade scale scores in reading and math both lost 8 points relative to the national average, compared to fourth grade. That’s larger or equal to the overall collapse of NAEP scores nationwide attributed to COVID.

And, worse, there is no reason at all to believe Florida’s test performance regression with age stops at eighth grade. The only two years the NAEP tested 12th graders — 2009 and 2013 — the Florida collapse worsened significantly with further age, but against a smaller pool of states.

So what to make of this?

You can rest assured that your top education officials know all about Florida’s eighth grade NAEP and learning rate failures, which is why they never discuss them. I suspect these test data realities helped drive Florida to drop its big state growth test — the Florida Standards Assessment — and move toward a “progress monitoring” regime this year that may or may not create functionally different data reporting models.

The discourse around Florida’s NAEP performance — and the catastrophic learning rate that we ignore on our state tests — makes me deeply skeptical of standardized tests and their use in our education systems and society. I see them as punitive political and social sorting tools, rather than “assessments” designed to help individual children reach their potential.

Forget whether test results are valid or biased. We can’t even accurately describe what the test results say — on their face — about the success of our state school system. So what use are they?

Florida’s politicians, education leaders, policy community and journalists should look at these results and ask this basic question: The data tells us your child will regress dramatically every year he or she stays in the Florida system. What’s going on?

If we can’t do that, then why do we force standardized tests on kids at all?

What we should be studying

I’ve been attempting to draw attention to this dramatic Florida regression dynamic for years. So I was pleased to the see the Tampa Bay Times Editorial Board and Hillsborough County Schools Superintendent Addison Davis notice and publicly address the massive drop in test performance between fourth and eighth grade in Florida on the 2022 NAEP. But I was puzzled by suggestions that it was something new, caused by COVID. It isn’t; and it wasn’t.

Indeed, if we took standardized tests seriously as diagnostic and development tools, we would have long ago started asking: What causes this? What changes need to be made beyond rebuilding and supporting a developmentally focused teacher corps? What are the system quirks of Florida that cause this dynamic?

Here are some good questions to ask and study:

· Why doesn’t “learn to read, read to learn” work in Florida?

One of our treasured education cliches is “learn to read” so you can “read to learn.” It’s essentially the policy justification for imposing mass retention on third graders, as Florida does. And yet, although Florida routinely ranks high fourth grade NAEP reading, our readers immediately lose massive ground relative to other states. The data shows that Florida’s often punitive emphasis on “learn to read” by third or fourth grade creates no benefit in “reading to learn” in later grades — in math or reading. Why not?

· What is the role of mass third grade retention in Florida’s fourth grade peak and subsequent collapse?

Florida law theoretically subjects more than 40 percent of Florida’s roughly 200,000 public school third graders to retention because of low scores. A smaller — but still significant — number is actually retained. Florida does not appear to publish that actual total number of third graders retained.

· What is the cost to the individual children and overall system performance?

Essentially all data shows that ripping kids away from their age cohort because of testing leads to significant human harm and increased drop out rates over time.

Is that affecting Florida’s learning rate for older kids and the eighth grade NAEP collapse? A 2017 study of a cohort of southwest Florida students showed that seven years after retention, 94% of the retained group remained below reading proficiency. It also showed that third and sixth graders find retention as stressful as losing a parent.

· How many voucher third grade testing refugees are there? What effect do they have on the fourth grade NAEP?

Third grade retention is not Florida’s only way to get low scoring fourth graders off the books for the NAEP. It’s been well-established that Florida over-testing and third grade retention is a primary sales tool for vouchers. The Orlando Sentinel’s Pulitzer-worthy “Schools without Rules” report in 2017 about voucher schools reported: “Escaping high-stakes testing is such a scholarship selling point that one private school administrator refers to students as ‘testing refugees’.”

How many testing refugees are there? And how does Florida’s massive voucher program — America’s largest and least studied — affect performance on the NAEP by allowing low scoring kids to duck it?

· What effect do voucher school dropouts have on scoring when they return in massive numbers to public schools?

At the same time, 61 percent of voucher kids abandon the voucher within two years (75 percent within three years), according to the Urban Institute, in the closest thing to a study ever done on Florida vouchers.

Enormous numbers of “low-scoring” kids duck third and fourth grade tests and then come back into the public system to be counted in the eighth grade NAEP and other yearly tests. That’s likely a recipe for score collapse. But there is no hard data to analyze. Florida is long overdue for such a study, and voucher advocates know it will be a data bloodbath.

Perhaps that’s because independent studies of smaller state voucher programs — with much greater oversight — shows attending a voucher school will “meet or exceed what the pandemic did to test scores,” according to Michigan State researcher and former voucher advocate-turned-critic Josh Cowen.

Test-driven instruction isn’t engaging. Kids come to understand how useless these tests are to their lives; and they behave accordingly. Teachers come to hate the test-obsessed model and leave the profession. How has that affected test scores?

A longstanding waste of human potential

For me, the eighth grade NAEP and “learning rate” failures are evidence that we’ve wasted a generation of human potential and severely damaged Florida’s teaching profession. Will anyone “follow the data” where it leads? Will anyone ask: Should our kids peak at age 9 and decline inexorably from there?

I believe Florida has long had one of America’s worst test-performing state school systems because of its governance model and intellectual corruption and pursuit of useless measures and fake accountability.

If you disagree, you should have the courage to look the data in the face and come up with your own explanation for what it tells you.

Billy Townsend was an award-winning investigative reporter for The Lakeland Ledger and Tampa Tribune. He oversaw education reporting as an editor for The Ledger. He has been an independent writer and journalist since 2008, focused on Florida history, education and civic systems. He was an elected Polk County School Board member from 2016-2020. Today he writes the Florida-focused email newsletter “Public Enemy Number 1.” He can be reached at [email protected].

How Online Courses in Programming and Leadership Changed My Career

Sun Jan 8 , 2023
When you buy through our links, Insider may earn an affiliate commission. Learn more. I’m the senior director of a $5 billion data company; before that, I was a manager at Ford. I took 25 online courses and earned certificates from Coursera, edX, and LinkedIn Learning. Focusing on hard skills […] 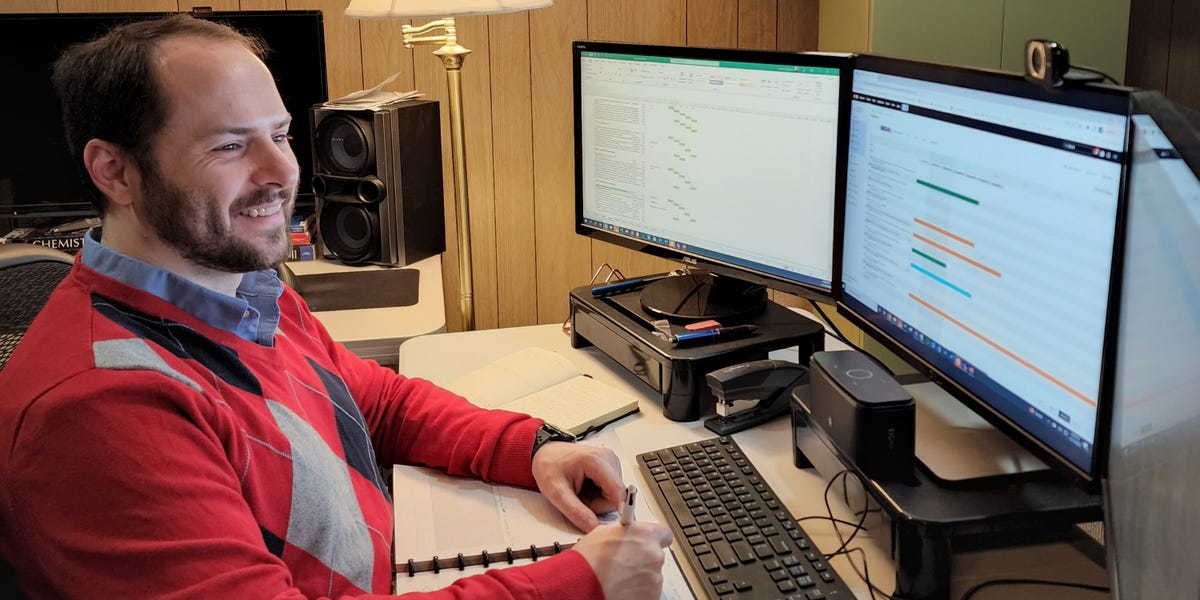